The OGC's 3D Portrayal Interoperability Experiment (IE) will test and demonstrate different mechanisms for the portrayal, delivery, and exploitation of 3D geodata based on open standards-based formats and services. The IE intends to identify, test, and further develop technologies and workflows that may be the foundation of spatial data infrastructures with a requirement for rapid visualization of extremely large and complex 3D geodata. Main focus of the IE will be on the currently discussed Web 3D Service and Web View Service. The IE will include digital landscape models, city models, and interior models, e.g., in the CityGML data format, as well as different client configurations. The IE will clarify the specifics of 3D portrayal services and provide best practices and guidelines for their implementation, integration, and usage. Additionally, the activities and findings of the IE participants are intended to directly support and influence current standardization efforts in service-based 3D portrayal.

The OGC members that are acting as initiators of the Interoperability Experiment are:

To test the interoperability along the visualization pipeline, the 3D Portrayal IE will test server-side issues as well as client-server interaction:

Members of the 3DIM Domain Working Group are drafting service specification candidates for 3D portrayal services: Web 3D Service (W3DS) and Web View Service (WVS). These services represent major building blocks of distributed spatial data infrastructures: Various applications and systems could benefit from their capabilities to present, explore, and analyze complex 3D geodata and could complement workflows or create totally new insights into geo-spatial information and processes. We propose this Interoperability Experiment (IE) to advance the development of these services, as well as to set up a 3D portrayal framework that includes the whole visualization pipeline, that is based on interoperable OGC standards, and that lowers the barriers for the implementation and usage of service-based 3D portrayal capabilities. 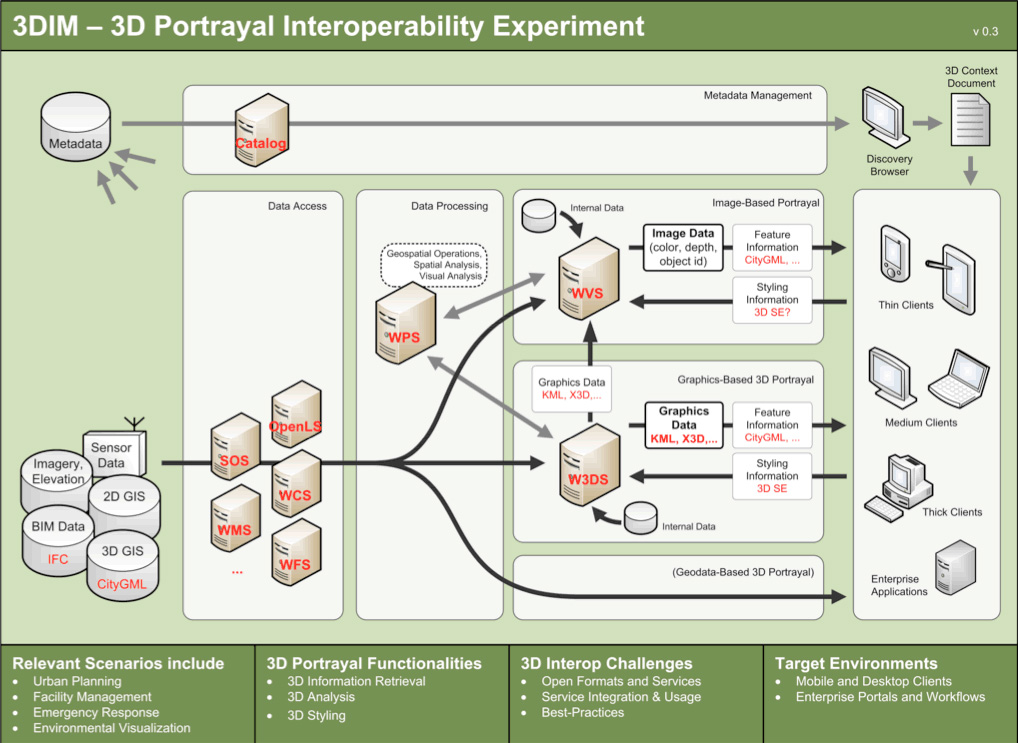