Das Global Earth Observation System of Systems (GEOSS) is a cooperation that seeks to connect existing and planned systems of earth observation. The “system of system” is supposed to serve as decision support system for decision makers and scientists. For the linking of thousands of instruments and their combination as coherent datasets technical standards will be promoted. The vision of GEOSS is to serve mankind and environment. There are “Societal Benefit Areas” which transfer the societal and ecological benefit of GEOS: 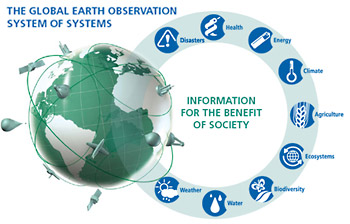 The GIScience research group of the Heidelberg University is engaged in the benefit area of disaster management in the GEOSS Architecture Implementation Pilot Phase 3 (AIP-3). The AIP-3 is an OGC Pilot which develops new process and infrastructure components for the broader GEOSS architecture. In this area we explore the use and development of web-based standardized geographical information systems in regard to the pre-disaster, response and post-disaster cycle. In this context the services W3DS and Emergency Route Service are being interlinked with data and services of other participants of the GEOSS working group of disaster management. In the long term the societal benefit will be in supporting future disaster emergency workers with expedient decision support tools to achieve a better and faster accommodation of the casualties.