Heidelberg Center for the Environment

Extract of the Rhine map of Wilhelm Besserer from the year 1595. Mechtersheim (above) is protected by a dike against the Rhine.

Land unter? – Floods and flood prevention along the Upper Rhine during the early and high middle Ages

In the western part of Europe, along the Rhône and the Loire, and along the lower reaches of the Rhine, protective structures against floods have been erected at the latest since the 12th century. However, comparative investigations have been lacking for the Central and Upper Rhine so far. When did early medieval protection structures against flooding emerge? Foremost, what were the natural and mental conditions to conduct these measures? The interdisciplinary research project Land unter?, funded by the Fritz-Thyssen foundation, addresses these questions.

The aim of the project is to develop a flooding history of the medieval river landscape of the  Upper Rhine valley as an interaction of river and man, built up around the coalescence of various case studies. Contextualized in its comparative studies in Central and Western Europe, the project is designed to develop a concept for the analysis of further river systems and their early dike systems.

The research cannot be separated between natural sciences and humanities. Both develop a constant interdisciplinary “ping pong” via historical logic and research practice. Dikes do not only react to landscape developments, but also shape the landscape at the same time. The designated protected agricultural areas and the aggradation of the river are in a close interrelated contact. Furthermore, the technical development of a dike cannot be isolated from its sociocultural conditions driven by a variety of actors. In terms of research, the historical function of a dike and its hinterland also provides evidence for dating as well as the geomorphological development of a river section to which the dike refers. The constant combination and contrasting of these different perspectives, combined with scientific dating methods and analysis within case studies, reveals an increasingly dense description of the respective dikes in their historical dimension.

A broad panorama of high and early post medieval dikes is emerging with the help of several case studies. These are representative in their regional landscape and cultural contexts on both sides of the Rhine (east and west) between Mannheim and Strasbourg.

Location of the drill core samples and the resistivity tomographies in the study area (Overlay of LiDAR-Data and TK50 Rastatt 2007, Blatt L7114; Projektion: UTM 32N, WGS84)

Near Ottersdorf, some anthropogenic linear anomalies on the terrain surface could be found with remote sensing via LiDAR data. This evident dike line near Ottersdorf (Distr. Rastatt) still consists of multiple sections with several repairs and constructions phases until today. Furthermore, the LiDAR data show a broad and powerful dynamic meander directly south of the detected dike line. This old meander correlates with an abandoned Rhine arm, which is recorded in archival sources and therefore leads around the villages of Plittersdorf, Ottersdorf and Wintersdorf on the east, which were situated on the Alsacian side of the Rhine during medieval times. During a flood, the Rhine broke through at Selz in 1306. The shipping east of these villages was stopped in 1472 because the old river arm was dammed due to a tolling conflict. After 1472, this former Rhine arm silted up but can still be recognized in the field. If the course on the LiDAR is identical with the main channel of the Rhine before 1306 and then formed its easternmost arm, the dike must date back before 1472. The repairs of the dike circle around typical scourings, which occurred at dikes when water with much power hit and broke them. This kind of destruction can hardly be expected after the closure of the Rhine arm in 1472.

The analysis of the most eastern, north-south-oriented dike structure, show that the paleo-meander, which accompanies the southern dike, cuts off an even older meander belonging to easternmost part. This geomorphic situation shows that the easternmost dike is probably the oldest. In addition, the LiDAR data show that the areas in the in the eastern riverside of the easternmost dike are more elevated compared to the hinterland. The deposited high flood sediments have led to an aggradation of the fluvial channel and the dike has thus fulfilled its flood protection function. Finally, the LiDAR data also shows that behind these dikes are ridge and furrow structures that partly reach up to the dikes. These field structures suggest that the dikes were aimed to protect agricultural land. Furthermore, in accordance to historical considerations, two dike generations have been identified. Because of repairs of the younger (West/East-Dike) one, the old meander must still have been active at the time the dikes were built.

According to the vita of Benno II., he erected giant stone boulders in Speyer between 1080 and 1088 to protect the cathedral from being washed away by the Rhine (Vita Bennonis II, cap. 21). Due to today’s morphology of the land tongue on which the cathedral of Speyer is located, the boulders must have been placed alongside southern side of the land tongue. This presumption is only possible if the main course of the Rhine flowed at the feet of the cathedral terrace in the 11th century. Intensive fieldwork via geoelectric and corings revealed that there are no clues postulating such boulders. However, the results show that there has been a natural fluviatile gully, which was filled up with diverse rubbish. It is expectable that this filled up gully helped to reduce the speed of the river at the foot of the cathedral’s terrace and therefore results in an effective reduction of erosion power. This could have led into an effective and sustainable protection of the cathedral without installing a massive dike. 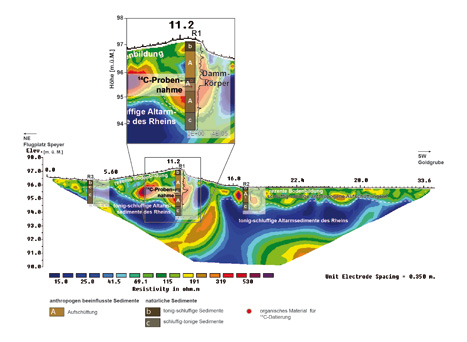 Geoelectrical Resistivity Tomography over the far east of three dikes near the “Goldgrube” with ground layers and magnetic susceptibility of the drill cores R 1-3 in the central area of the dike.

The Goldgrube is the remnant of an abandoned Rhine meander, which was cut off from the river in the early 15th century. At least the constructions of dikes is mentioned in an archival source from 1419. On a current geomorphological map remnants of dike lines in this area can be confirmed by a LiDAR based DEM (digital elevation model) combined with a field survey. Although these dikes are not recorded on any historical maps, it can be assumed that the dikes are limited to the former “Giessen” due to the location and the course of the river. Functionally, these dikes only make sense as long as the “Goldgrube” and subsequent “Gießen” were still connected to the Rhine. This suggests an installation before the year 1419. This example perfectly shows the mutual strengthening of historical sources and geomorphological field data when developing a scientifically argued narrative.

With its small, almost sinuous routing, the Eselsdamm fulfils an essential aspect of our presumptive evidence for a great age of dikes. In local research, the Eselsdamm is also interpreted as an infrastructure measure related to the conversion and maintenance of the Speyer cathedral (Second construction phase) from about 1080. The dated material, derived from sediment samples from the core of the dike, suggests a construction of the dike in the early post medieval times. At this time, the dike is constructed with a debris core made of red sandstone rock waste, bricks, and mortar with a top layer of loess derivatives (thickness circa 1m).

In Besserer’s Palatinate map of the Rhine, the oldest map of the Upper Rhine from the year 1595, several dike lines can clearly be identified. Among others, one is depicted close to Mechtersheim (Distr. Rhein-Pfalz-Kreis). From a geomorphological point of view, the village is save from flooding at its location on the lower terrace. Therefore, the dikes probably protected less the village itself than the surrounding arable land. This is also visible on several other historical maps of this area. This case study is a particular challenge for identifying the position of the depicted dikes and meander arcs on later maps and in field surveys, because of the high number of dikes and their contemporary improvements.

The combined analysis of historical, geomorphological, and topographical maps as well as the LiDAR data have resulted in several suspected dikes near the villages of Mörsch and Forchheim (Distr. Karlsruhe). Now, they will be investigated with geoarchaeological and historical methods. However, these dike lines do not appear on maps before the 19th century, but field names suggest a dike around Mörsch as early as the 16th century. Further fieldwork should clarify the precise age of these dikes.

The villages are located on the edge of the higher terrace. Their history reaches back to the early Middle Ages, according to archaeological and archival sources. Forchheim is even mentioned as the early medieval capital of the “Ufgau”. It can be assumed that the nutrient-rich floodplains have always served – as they still do today – as agricultural fields of these villages in the Rhine valley.