Charlotte Stirn worked as a research assistant in the laboratory for geomorphology and geoecology from 2012 to 2017. Afterwards she worked as a research assistant in the HeiKa-Explore project AsFreeH2O. Since July 2018, she has been doing her doctorate as part of a cross-institute cooperation project between Geosciences (Dr. Martin Maier), Geography and Global Health (Dr. Amanda Wendt, now Potsdam Institute for Climate Impact Research), which was funded by the Heidelberg Center for the Environment (HCE) (Influence of human waste on arsenic release into drinking water in Bangladesh - geochemical and statistical investigations). Since January 2019, she has been a scholarship holder of the Johannes Hübner Foundation, Gießen.

In some regions of the world and especially in Southeast Asia, groundwater contains arsenic levels above the World Health Organization (WHO) drinking water guideline value of 10µg/l. This is particularly problematic in countries where groundwater is used as drinking water without further treatment - as in Bangladesh.

The problem has been known for decades, but the processes of arsenic mobilization and the influencing factors are still not fully understood. This is because the arsenic contents in wells exhibit very strong spatial variability - with very different contents in a very small area. A relevant factor are the geological conditions, but also other factors such as organic carbon content of the sediment, mineralogy, hydrology and land use. 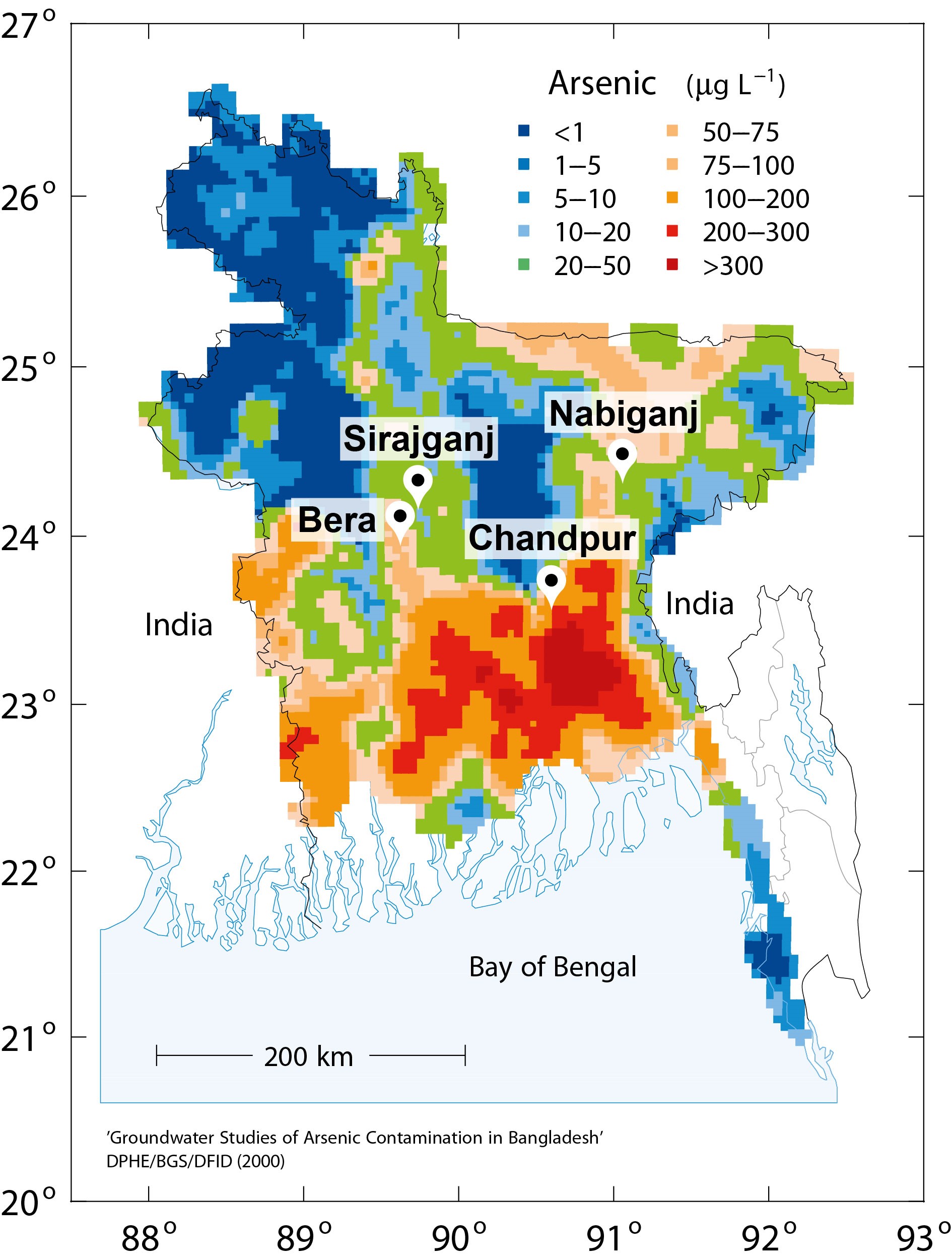 Fig. 1: Map of arsenic concentrations in the groundwater of Bangladesh 2001 (British Geological Survey 2001) and location of the four current investigation sites.

According to the current state of research, it is assumed that mainly organic carbon contributes to the development of anoxic conditions. Under these conditions, the iron minerals dissolve and the arsenic bound to them is released.

Within the framework of the investigations sponsored by HCE, it was statistically examined whether the distance between simple pit latrines and wells has an influence on the arsenic content of the well (Fig. 2). The project is not yet completed, but initial data indicate that wells in the immediate vicinity (1-2m) of latrines contain significantly less arsenic. This is not surprising, since the latrines carry not only organic carbon and phosphate but also oxygen and oxygen carriers such as nitrate - which leads to the immobilisation of arsenic. It has not been possible to clarify whether geochemical conditions are created at the distance of latrines or by other anthropogenic carbon inputs (e.g. ponds), which could lead to arsenic mobilisation. 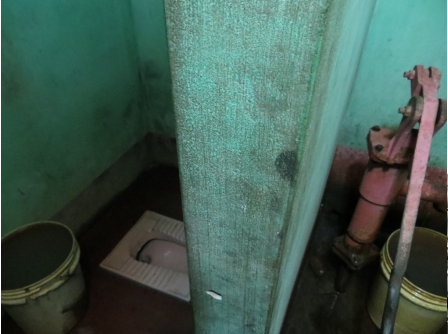 Fig. 2: Example of a normal bathroom in Bangladesh: The simple household well with a hand pump is located directly next to the latrine, whose wastewater is usually discharged into the underground (pit latrine), a septic tank, or into the nearest pond - often only a few metres away from the well.

The aim of the doctoral thesis resulting from this project is to clarify the question of which spatial and temporal factors can be determined. The following approaches are planned for this purpose: 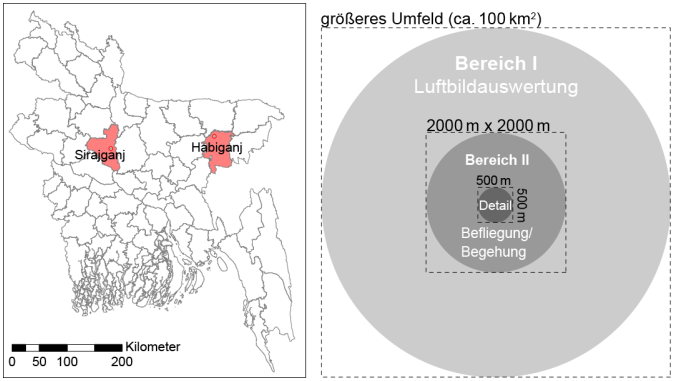 In a bachelor thesis at the Institute of Geosciences it could already be established that extremely high methane concentrations occur at the Habiganj site (NO Bangladesh). Isotope measurements of methane (CH4) and carbon dioxide (CO2) showed clear indications of microbial formation of the gases. A correlation between arsenic and methane contents is particularly striking. In February 2020, further gas and groundwater samples were taken at the Bera and Chandpur sites (see Fig. 1). The process causing this correlation is to be clarified in a proposed DFG project together with the University of Tübingen.

The doctoral study is scheduled to last three years. In the first year (2019) the methodology was developed, which will be implemented on site in the second year (2020) with the support of an experienced sampler. In the third year (2021) the data obtained will be evaluated. In order to ensure the representativeness and comparability of the data, sampling will be carried out at two locations.

On site, the project is supported by AGAPE e.V. Bangladesh - the sponsor of the Heidelberg-based association Agape e.V.

The PhD is financed by the Johannes Hübner Foundation, Gießen.

Evaluation of anthropogenic influences on sediment and groundwater and their effects on arsenic mobilisation in Bangladesh using the example of latrines, in the districts of Pabna and Sirajganj.

Reconstruction of the development of natural areas and agriculture based on sedimentological and geochemical analyses of a wetland - using the example of a wetland near Sikenica-Agáta, southern (western) Slovakia.