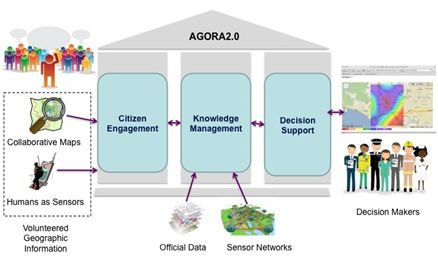 AGORA is a research line being developed at the Institute of Computer Science and Mathematics of the University of São Paulo (Brazil) and at the GIScience Research Group of the University of Heidelberg (Germany). AGORA aims at supporting communities in building resilience against natural disasters and extreme events, with a particular focus on flooding.

The acronym AGORA is inspired on the Greek ἀγορά (agora, literally ‘gathering place’), the spot in ancient Greek cities that was the centre of athletic, artistic, spiritual, and political life of the city (Wikipedia, 2013). Thus, the agora in ancient Greece lends itself here as an inspiring metaphor for AGORA – a transdisciplinary approach that is able to gather organisations and individuals by allowing them to bring their information supply and demands to a common platform using web 2.0 technologies. As a result, AGORA achieves an integrated information basis that is assembled from the individual, heterogeneous pieces of information and can thus be dynamically analysed and interpreted by different experts/researchers and other stakeholders. AGORA will thus create a knowledge management platform where relevant issues and data are provided by the various stakeholders, bringing together the perspectives from science, the general population, and government (including local decision-makers, disaster management and emergency agencies), in order to collaborative tackle societal challenges such as the management of flood risks.

The premise of AGORA is that flood hazard and risk maps can help building resilience against flooding by offering support to decision-making in planning and preparation for flood risks, as well as subsidising responsive efforts in the onset of flooding events. Four unleashing this potential, AGORA will develop methods for near real-time flood risk monitoring and analysis by generating dynamic risk maps that combine information from several sources. This will be accomplished not only by fusing data from existing information sources that are usually not integrated (official data, sensor network data streams, existing collaborative maps), but also by creating and integrating a new source of information with new methods for eliciting local knowledge from citizen volunteers. Hence, the hypothesis put forward here is that a collaborative approach that involves citizens, flood risk management experts/researchers, and governmental emergency agencies can improve the availability and quality of the information for flood risk monitoring and analysis, and thus support decision-making in managing flood risks.

For more information please refer to the project website: http://www.agora.icmc.usp.br