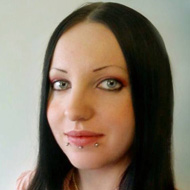 Anastassia Biederstaedt is a Ph. D. student in the research group Human Geography of North America and participates in the Ph.D. in American Studies Program: Class of 2018 of the HCA. Her dissertation that carries the working title Animal Milk in Human Culture – A Critical Study of U.S. Milk Advertisements in the 20th Century is planned as an interdisciplinary project that examines milk advertisements as outcomes of a complex interplay of social and historical vectors of power. On a more general level, her dissertation also analyzes the meaning of milk within geographies of food. Anastassia Biederstaedt studied Anglistics and Art History at the Univeristy of Stuttgart, earning a B.A. which was followed up by a M.A. in Anglistics.