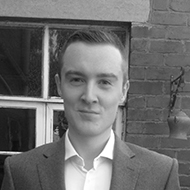 Louis Butcher is a doctoral student representing the Heidelberg Center for American Studies (HCA) and the Geography of North America department. His PhD project focuses on the impact of police body-worn cameras on police use of force in the United States. It encompasses the fields of criminology, sociology, human geography, and political science.

Louis completed his bachelor’s degree at the University of Bradford in (modern European) history, which included spending a year studying abroad at Clarkson University in Upstate New York. His bachelor’s thesis, entitled “A Moral Analysis of the Actions of Mordechai Chaim Rumkowski,” reassessed the historical legacy of Chaim Mordecai Rumkowski, the leader of the Lodz Ghetto's Judenrat (or Jewish Council) during the Holocaust, in academic scholarship.

Louis also gained his master’s degree in American Studies at the University of Heidelberg, specializing in law, history, and political science. His master’s thesis, entitled “The US Government’s Effort to Curb Tax Evasion through the Implementation of the Foreign Account Tax Compliance Act (FATCA),” outlined the far-reaching social and legal ramifications of this controversial piece of legislation.