A sub-project of:
Urban Office at the University of Heidelberg: Establishing an “Reallabor” Sustainable city/urban development in a knowledge-based society

Knowledge-Based Urban Development – more than a Vague Concept. Insights and Analysis from the RealLab at Heidelberg University. (Working Title)

Sub-project 1 deals from a geographical perspective with the transformation of city districts and/or creation of new neighborhoods and urban quarters as a result of a knowledge-based urban devel-opment. As stated by numerous scientists, the former industrial society is about to be replaced by a knowledge society. Therefore, this research project approaches the spatial consequences in cities as well as changes in the urban societies of the global north.

The spatial focus is on Heidelberg. Renowned for its university and castle, the city has a deep connection with the term knowledge, the latest proof being the local IBA – International Building Exhibition Knowledge Based Urbanism. Heidelberg describes itself as a knowledge pearl – a city that views its economic and social foundation in the resource knowledge – and is currently implementing a knowledge turn towards a knowledge-based urban development. This notion argues that only cities promoting knowledge, creativity and innovation are able to achieve ongoing success. Thus, as a very prominent concept in the urban society of Heidelberg and its current urban development projects, the term knowledge lies at the heart of this project’s research interest. The latest urban development processes, the conversion of former military sites in three city districts and the conversion of a former railway area of the Deutsche Bahn are being put in relation to the concept of knowledge-based development. 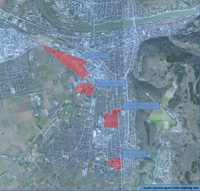 The research project addresses knowledge-based development using examples of four current development processes-Bahnstadt, Patton Barracks, Campbell Barracks, and US-Hospital. These four projects are located mainly in the south of Heidelberg, particularly in the districts of Bahnstadt, Kirchheim, Südstadt and Rohrbach. The term knowledge as used in this research project is comprised of multiple dimensions of knowledge as well as a variety of knowledge operators such as schools, the university, research institutions and socio-cultural or socially-engaged institutions. This diversity is illustrated by the four development processes, in which different understandings of knowledge are noticeable. The research project uses qualitative methods, such as expert interviews and document analysis of municipal studies and reports, political proposals, local press articles etc., and seeks to broaden the understanding of spatial and societal implications of knowledge-based urban development. Since a scientific ex-post evaluation is not possible due to the continuation of the four development processes beyond the limited timeframe of the research project, the strength of the project lies in combining process monitoring and investigation while enabling communication and debate between scientists and the citizens of the urban society in Heidelberg.