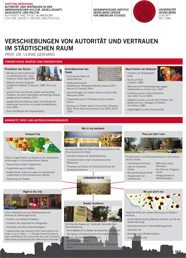 GKAT is a research training program located at the Heidelberg Center for American Studies (HCA) that focuses on the emergence and transformation of authority and trust in American politics, society, religion, literature, and culture from the nineteenth century to the present from a profound interdisciplinary perspective. In order to facilitate collaboration between the disciplines, three broad research areas have been designed to reflect local research interests but also concern pressing issues of U.S. society and culture. These three themes are the authority of the modern state and trust in public and social institutions (I), the urban dimension of authority and trust (II) and authority and trust in culture, literature and religion (III).

In Geography, the urban dimension of authority and trust is central. Embedded in a theoretical context of the different meanings of trust and the resulting practices of trust work, we see trust as a social reality that needs to be analyzed from a broad socio-geographic perspective. In our research, we focus on the tensions between institutional power and everyday life in American cities, which has been subject to profound social and economic changes, such as the rise of the service sector, immigration, gentrification, segregation, and branding strategies. Inquiries into the ways in which people of different ethnic and social backgrounds employ authority, trust, identity, and power in urban spaces thus open up numerous new research questions which we address in different research projects.

Ulrike Gerhard and Judith Keller explore the urban dimension of trust in the context of home and housing. As living within cities becomes more and more unaffordable due to neoliberal policies and global market forces, displacement from and discrimination on the housing market shape the everyday realties of many urban residents. This often entails the loss of home for those who are not part of the creative class and international elites, resulting in an increasing fragmentation and disintegration of many American cities. Trust and solidarity do not only erode but are undermined by practices of un-homing such as evictions and forced displacements that lead to major urban restructuring and, at the same time, to increasing inequalities. "My home is my castle"

Cosima Werner’s ethnographic research explores the spatial manifestations of trust in and around convenience stores in marginalized urban neighborhoods. Her case studies are located in some of the poorest neighborhoods of Detroit and Chicago, where convenience stores are often the only place for the communities to meet. Here, distrust rather than trust becomes a decisive factor as manifested in the relationship between the mainly black and male customers, the storeowners, and the patrolling police officers.