Transnational Tourism after the opening of the borders: Case study of Thailand, Laos, Cambodia and Vietnam

There are new possibilities for transnational tourism, after the opening of the borders of the previous communist countries in Southeast Asia, to provide more fascinating itineraries and combine tourism highlights in Laos, Vietnam, Cambodia, and Thailand. Transnational tourism in Laos would make possible with the improvement of traffic facilities, especially with the improvement of the road network. Most of the roads in Lao as well as in Cambodia had been in a very poor condition till the year 2000. Some were not improved since the French times. This situation has dramatically changed during the last 10 years. In I-san there is now a very dense network of highways connecting all major province cities within a few hours. In Laos as well as in Cambodia the old national highways had been improved with the help of international projects, for example, organized from Japan or international funds.

There were a lot of potential tourist attractions in Laos, Cambodia, and Vietnam. Moreover, there were ancient towns and natural tourist places which were reserved on the World Heritage List. One example of Lao PDR’s heritage is Luang Prabang. This wonderful town has increased in popularity over the years. Another was Wat Phou Champasak and the ancient city of Settapura dated 5th century. In the southern part near the border to Cambodia, there was the largest waterfall by volume in Southeast Asia, named Khon Papheng. There were twenty one national protected areas with selections of established ecotourism. Most of these tourist attractions had great uniqueness. For Thailand, more tourism opportunity in northeast region was expected as there are gateways which already opened and will be open in the future. For example, Thai-Lao Friendship Bridge in Nong Khai province was the first international bridge across the Mekong River. The bridge was built jointly by the governments of Australia, Thailand and Laos. It was opened in 1994. The Second Thai-Lao Friendship Bridge across the Mekong River was opened to public in 2007, connecting the border towns of Mukdahan province in Thailand and Savannakhet province in Laos. 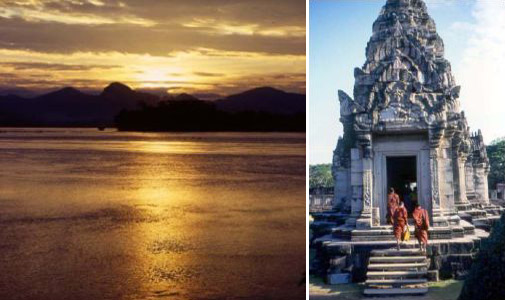