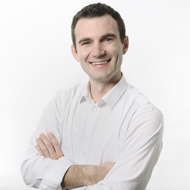 during lecture time Thursday 11 am to 12 noon

during semester break by arrangement

Robert Panitz is a research associate in the economic geography research group at the Heidelberg University since September 2010.
He received his doctorate in 2016 with a cumulative dissertation entitled On Individual Interactions and Firm Networks: The wealth of Context and Meaning in Relational Research.

He is a member of the research group “Global stock image market” and has been involved in the DFG (German research association) research project Neoartisan, digital technology and the new role of the periphery in the global market for still and moving images (Argentina, Uruguay).
He is also a founding member of the German Association for Network Research (Deutsche Gesellschaft für Netzwerkforschung).
He studied Geography, Economics and Computer Science at the Catholic University of Eichstätt-Ingolstadt and the University of Nottingham. He wrote his diploma thesis Knowledge and Innovations processes in companies: A Network Perspective. The Diffusion of controversial organizational Innovations at the Research Group of Economic and Social Geography in Heidelberg.

His research focuses on the impact of technological change on regional development and the role of social networks in economic and social life. Robert Panitz participates in various projects and has contributed to various case studies on companies, regions, and markets from a relational perspective.