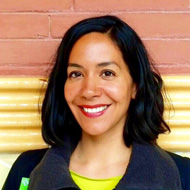 Claudia Sandoval, born in Tijuana, Mexico, studied Philosophy at the Universidad Autónoma de Baja California and obtained a Master’s Degree in Regional Development from El Colegio de la Frontera Norte. She has worked as a freelance journalist, research associate and lecturer in Mexico and Germany. Since March 2014 she hast been working on her PhD Research in Heidelberg. Her Master’s work, “Do-it-yourself Art. Estudio de la producción artística y las redes sociales de cuatro colectivos de artistas de Tijuana” follows the career paths of four groups of young artists working with new media in the Tijuana-San Diego region. It describes the quality of their social ties in the context of the Mexico-US border during the end of the nineties and the beginning of the new millennium.

Her current research explores the social relations among entrepreneurs and artists working in the first Center for the Cultural and Creative Industries in Heidelberg. Her research interests are social networks for the artistic production, social networks and the creative industries, female entrepreneurs in the creative industries and artistic/creative identities.